Super excited that the entire trilogy is complete and on sale as ebooks on Amazon, and print via multiple sites. Huge thanks to everyone who has read, rated and reviewed the books!

I’ll be starting a new series in 2019, and have a few novellas clamouring for attention, too.

MESSENGER: BOOK ONE OF THE SHIFTER WAR

Danil is a deadlands scavenger, his days spent scouring a barren land for ancient battlefield relics and mage-crystals. When the brutal magi of Roldaer take over his village, Danil becomes the key to unleashing a powerful enemy set on plunging both kingdoms into war.

Desperate and on the run, he finds unexpected aid from the Amasian shapeshifters. Among them is Hafryn, an irreverent shifter who fights the magi with sword, tooth and claw. But safety with the shifters cannot last. As the magi set their plans into motion, Danil will have to embark on a terrifying mission to a broken citadel. Failure to stop the magi may cost him far more than his life, and Danil discovers that courage and determination may not be enough…

Messenger: Book One of the Shifter War is available from Amazon now.

As the first ever human custodian, Danil is sworn to protect the strange new magic threading across the deadlands. But the armies of Roldaer are stirring, and when an assassin nearly takes his life, Danil sets out to win the aid of the Amasian High Council

With Hafryn by his side, Danil discovers that allies are rarely what they seem. Intrigue and betrayal haunt their steps, and soon Danil and Hafryn must use all their wits to stay alive. Meanwhile, a fearsome magic that has not been unleashed since the blackest days of the Great War is reawakened.

Using such magic could see Danil save the deadlands, or destroy it.

Visioner: Book Two of the Shifter War is available from Amazon now. 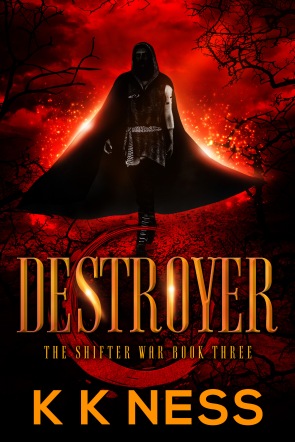 War is dawning and not even Danil’s growing abilities can stop a powerful dread lord from taking revenge.

Finding themselves deep within enemy territory, Danil and Hafryn soon discover a greater destiny awaits them – one that has its roots in the Great War. With unexpected new companions, they must journey across Roldaer to halt the spread of a terrible curse.

But the dread lord Kaul has plans to ensnare Danil and Hafryn. In the midst of a land being destroyed by those meant to rule it, Danil must use all of his wits to keep them safe. If he fails, he stands to lose not only Kailon and Amas…but also the wolf shifter he loves.

Destroyer: Book Three of the Shifter War is available from Amazon now.

We acknowledge the Bindal and Wulgurukaba people upon whose Country these books were written.

← Destroyer – Chapter One
Warden of Storms →

2 Comments on “The Shifter War Trilogy”